Many hearty congratulations to Stephanie Gonthier (’15), who has been chosen to receive a travel award to the PSUxLING Conference to present her work, “Rate of agreement attraction errors influenced by experimental methodology”. This is a competitive award, given to the presenters with the most meritorious and academically-rigorous abstracts. Well done, Stephanie!

The Linguistics Lab is on hiatus during the Fall of 2014. We plan to re-open in August, 2015. If you are interested in joining our team, contact Professor Lorimor by e-mail.

We’re going to Canada! Our paper on naming errors within families has been selected as a platform presentation at the Mental Lexicon Conference this October. Many thanks to Research Assistants Lindsay Zajac, Julia Buffinton, and Sarah Lipski, and to all the families who participated in this project.

Professor Lorimor is pleased to announce the birth of Christina, the newest “member” of the linguistics lab. She joins her sister, Sarah, and her father, Anthony, in providing inspiration and encouragement for our work. 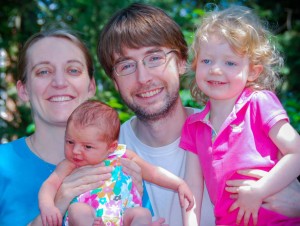 Congrats to our 2014 Graduates!

We’re sending our hearty congratulations and thanks to Arielle Allentoff (’14) and Lindsay Zajac (’14), who are graduating from Bucknell this weekend. Arielle will be starting a Master’s Program in Speech and Language Pathology at Boston University, and Lindsay will be beginning a PhD Program in Clinical Psychology at the University of Delaware. We also want to congratulate Laura Snider (’14), who did a research project in our lab during the summer of 2013. She’ll be starting a PhD in Linguistics (syntax!) at the University of Connecticut in the Fall. Best wishes to all of our graduates!

Congrats to Arielle Allentoff (’14), whose research project, “Delaying verb production changes what matters in subject-verb agreement” has been accepted at the 2014 CUNY Conference of Human Sentence Processing. Many thanks to those who have helped with the project, most notably Kelly Pontecorvo (’14), who helped to get the experiment off the ground!

Congrats to Jason Schoenberg (’13), whose 2012 summer research project, “Nouns and verb in dis-agreement” has been accepted at the 2013 CUNY Conference of Human Sentence Processing. Way to go, Jason!

A photo of Julia Buffinton (’14, Cornell), along with a poster about the iPhone app she developed for collecting misnaming errors, was featured in the Bucknell Magazine.